Idea of making this experiment has born with the video(https://www.youtube.com/watch?v=OoTHKYV0q2s) that i faced with on youtube when i am watching videos which are shared by Mr. Erkcan on our course's online page.(21/10/2015)

Then he found a suıtable room in İstanbul Bilgi University for making this experiment.(23/10/2015)

First of all, we checked our materials which we bought for being sure about their utilizable.


We have worried about copper wire, because it should have been tickher than ours. We tried to find the best copperwire but we couldn't...So, we would have lower number of wraparound than the video has. We have lost so much times when we were winding up.


Then we worked the cable which we found. It was thinner than we had first but tickher than the video. But we didnt have another alternative.So, we started to work. 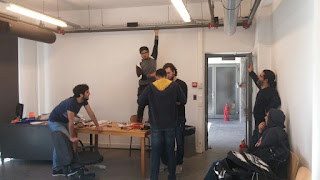 We have setup the experiment.


The view when you look from the penstock.

When the bullet cut the short circuit.


The we decided to decrease the mass of target. But when we were decreasing the mass of it, another problem shows itself to us... We couldn't control aerodynamic. When  the magnet released the target, the target started to turn around of itself because of air friction.

Influence of air friction and bullet at t=3 seconds

And then we tried to increase our number of wraparaound but it didn't increas the voltage that we wanted. Because we rolled the cable on to the wraparaound we had.(When you roll second or third etc. time on to pintle, magnetic field which those wraparaound gives will be lower than the first wraparaound.

So we decided to meet in another day and bring(buy) the materials which would solve our problems.

And we have met on 06/11/2014 but we still haven't had the cable that the video shows us. And Proffesor Serkant gave us thinner cable which he found it from old computer items.(In the same time we cut the surplus of cables) When we wind up it with that cable we could have roll more than before and we had more wraparaound and we had more magnetic field.So, we did not have to decrease tha mass of the target(monkey) after that we hit the target(monkey)2 times!


A video of the time which we hit the target.

But we couldn't hit the target regularly because we faced with problems such as cannot fitting the elevation of the bullet and penstock(it shows us if te elevations are not fit; direction of bullet can change because bullet may not move straightly in penstock), aerodynamic of the bullet(it make bullet move in the air tiltedly.) as you can see  on video,

and the stabilization of the station where we put the penstock(it makes bullet goes tiltedly)
Here is our youtube channel which you can reach our Final Experiment Video!

Next week, we will try to fix those problems that we faced with! And add more videos from other views!